Ingrid, a beautiful and cosmopolitan Romanian woman, is traveling by plane returning to her home in Oslo, where her Norwegian husband is waiting for her. Her travel includes a short layover on the Malpensa airport in Milano. Ingrid wants to buy a perfume from the duty free shop and realizes that her wallet is gone. She calls her husband, asking him to cancel her credit cards and accepting his criticism. Left without money and without ID, Ingrid can’t board her flight to Oslo and she is terrified that her delay will jeopardize the upcoming overseas vacation planned together with her husband. She starts crying. A stranger who had heard her talking on the phone addresses her in Romanian and offers to help her, somehow. Frustrated, Ingrid smokes a cigarette in the airport toilet, despite the severe restrictions. The stranger returns with her wallet, from which only the cash is missing. Ingrid has her ID back, but two Italian policemen show up and encourage her to file a complaint for the theft of the wallet and thus help them start an investigation. With the Romanian stranger standing a few feet away, Ingrid maintains that she found her wallet by herself and refuses to file the complaint. Once boarded for Oslo, Ingrid calls her husband again, this time treating him with a newly found firmness. 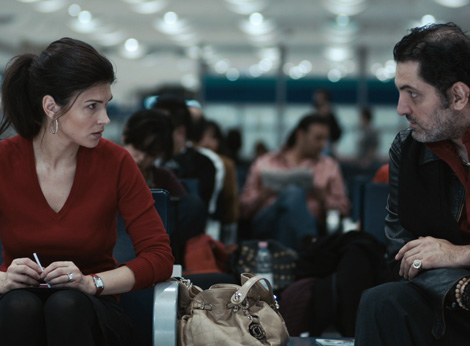