Almost everyone seems to want to leave Romania where life does not have too much to offer. Luci and his fiancée Sorina have just become homeless. Sorina’s father would have found something but he has been dead for years. Sorina and Luci go to his grave, waiting for a sign from heaven. In this cemetery, the three different stories come together. A bride cries on a bench, a couple of policemen rush down the alley, a red car runs slowly behind the graves. Sorina and Luci observe all these in tension. However, when the sign comes, if far from mystical: a bottle falls from the sky, straight on Luci’s head. Fortunately, they get a lift to hospital from a nice Frenchman. In an attempt to win back Sorina, Luci takes a job as a living beer bottle. In this way he meets Mihaela, who was jilted at the altar and now works as a walking telephone commercial.

Occident gathers and intersects several stories about migration and especially about those who stay behind. The three protagonists of the film influence each other’s life even without themselves knowing it. 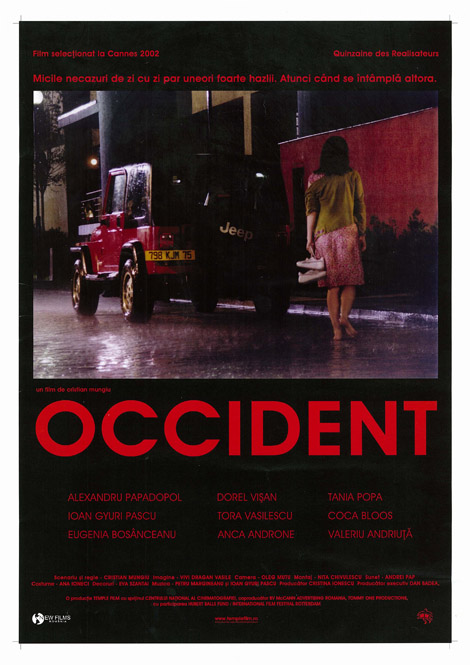