with the support of:
the Romanian national center for cinematography
eurimages

with the contribution of:
canal +
france télévisions
ciné+
wild bunch

Synopsis:
Romeo stands in the kitchen in front of the open window and listens to the trains passing in the distance. It’s June, and it’s getting dark outside. He has to talk to Eliza and doesn’t yet know what he will tell her. Being a father and growing older have lately become overwhelming for him. He’s tired, and his life is very different to what he imagined it would be back when he was 30.
ROMEO ALDEA (49), a physician living in a small mountain town in Transylvania, has raised his daughter Eliza with the idea that once she turns 18, she will leave to study and live abroad.
His plan is close to succeeding – Eliza has got a scholarship to study psychology in UK. She just has to pass her final exams – a formality for such a good student as she is.
On the day prior to her first written exam, an incident jeopardizes Eliza’s departure.
Now Romeo has to make a decision. There are ways of solving the situation, but none of them using the principles he, as a father, has taught his daughter. 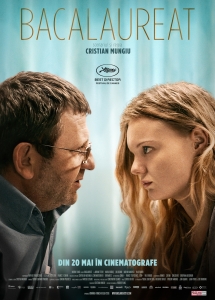